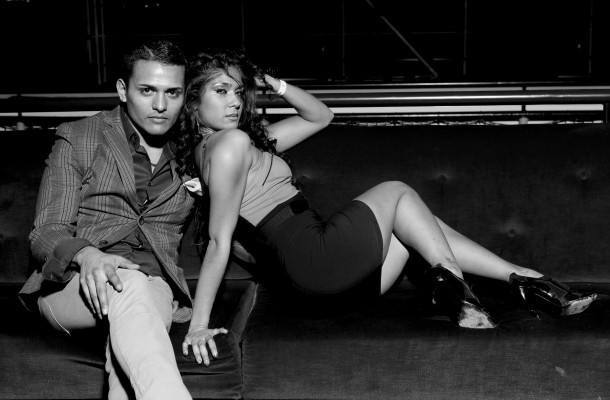 Adolfo Indacochea is an explosive and energetic dancer who is known all around the world for his smooth and unique style. This unique style combines traditional mambo with elements of jazz/modern, flamenco, and ballroom dances. His sense of musicality and flow is evident through his choreography and improvisations.

Born and raised in Lima, Peru, Adolfo moved to Monterrey, Mexico when he was 19 to study Industrial Engineering and began taking salsa classes “On 1” as a hobby in 2001. In less than two months, his talent was quickly recognized by Adrian Arellano, a well-known performer and instructor in Mexico, and was asked to be one of the founding members of Salzumba Dance Company. After ten months, he began dancing and teaching on his own and later formed his first dance company named “Mamboss,” which is now recognized as one of the biggest salsa companies and schools in Mexico. In search of developing his talent, Adolfo moved to San Antonio, Texas in January of 2004 and was invited to join and teach with Semeneya Dance Company as well as work independently with his former partner Claudia Vazques. It wasn’t until 2003 that his passion for dancing “On 2” developed after seeing Eddie Torres and his Dancers perform at the New York Salsa Congress that year. With much determination and ambition, he taught himself how to dance “On 2,” New York Style, with the dream of becoming an Eddie Torres Dancer within the next few years.

In pursuit of his dream, he moved to New York City in September of 2004 and was invited to be the exclusive partner of Amanda Estilo in addition to training with Karisma Dancers, directed by his friend Victor Mayovanex. It wasn’t until December 2004 that his dream of becoming an Eddie Torres Dancer was fulfilled. His mentor Eddie Torres discovered his talent and potential instantly and invited Adolfo to join one of the most prestigious teams in the world. After 8 months, Adolfo began to perform exclusively with Jessica Ortiz at the same time becoming one of the elite dancers in the Eddie Torres Company and rising to be one of the newest stars in the New York Mambo scene. After 2 years, his mentor Eddie Torres gave him his blessing to move on and to strive to be one of the top mambo dancers in the world. Shortly after, Adolfo teamed up with former Eddie Torres dancer Melissa Rosado and now teaches and performs all over the world with her.

Fortunately, Adolfo has had the fortunate pleasure to dance at venues such as Lincoln Center and Lehman College and has shared stages with well-known artists such as Gilberto Santa Rosa, Larry Harlow, and Frankie Vazquez. He has performed and taught all around the world including the top cities in the United States, Mexico, Canada, Puerto Rico, Peru, United Kingdom, Japan, Spain, France, Germany and Italy. Adolfo has had the wonderful opportunity to perform with divas such as Amaryllis Cintron, Nancy Ortiz, Amanda Estilo, Duplessey Walker, and Jessica Ortiz.

In addition to his enthusiastic personality and genuine love for mambo, Adolfo’s unique teaching style brings flare and fun to any class. He introduces elements of timing, styling, shines, body movement and original turn patterns for all levels. Because Adolfo believes that anyone who is interested in dancing mambo should familiarize themselves about music and their roots, his music selection in class varies from different artists, eras and regions.

Adolfo has shown commitment to evolving his talent and ability and bringing something new to the dance scene, with an emphasis on conserving the mambo tradition but with a new flare. Adolfo captivates the audience with his extraordinary stage presence and passion for this art form. He truly has a genuine love for mambo and always dances “from the heart.”