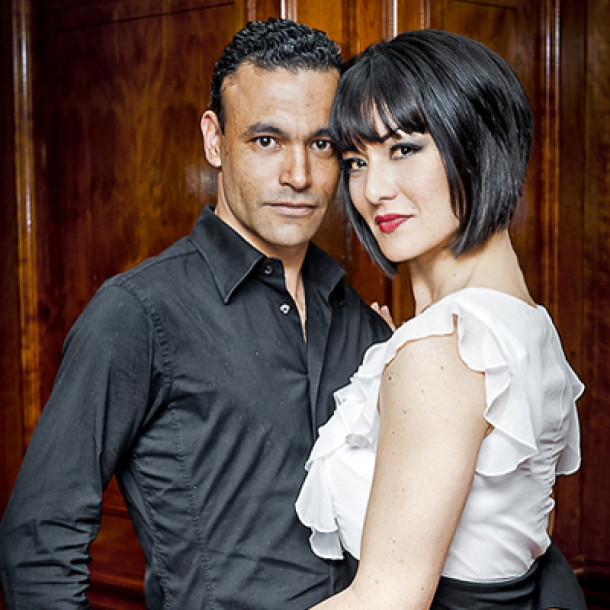 MARCHANT BIRCH, Director of Alchemy Dance Company & Academy
Marchant was born and raised in Cape Town, South Africa. He was trained in Ballroom from the age of 7 up to competitive professional level. He won numerous competitions in Ballroom and Street Dance, and was winner of the National Cape Jazz Championship 1999 in South Africa, competing against over 500 couples (Cape Jazz is a partner dance similar to salsa).

On taking up salsa he understood the need to learn the dance form from its authentic Latino roots and has trained with the worlds best Puerto Ricans, New Yoricans, Dominicans and Cubans. He was invited to start teaching and performing salsa in the UK in 2001 and has since become one of the most sought after teachers & performers in the UK and internationally. Marchant is also the 1st and only representative of South Africa in the international salsa community.
In 2005 Marchant’s choreography of Tito Puente’s ‘Take Five’ received high acclaim from the Mambo King himself, Eddie Torres. It was considered a ground-breaking choreography at the time for its flowing use of line and arms, and intricate musical interpretation. The influence of this can be seen today in UK salsa performances
Growing up in Africa undoubtedly contributed to Marchant’s intricate sense of rhythm, from the raw sound of the carnival drum, to the sophistication of the Cape Town jazz musicians. In his years in salsa he has taken his teachings from the latinos, and blended it with ballroom technique, jazz and afro movement, developing a smooth, elegant style of salsa and mambo known as the Alchemy Way. He has a reputation for being one of the world’s best leads with many a male dancer coveting his creative turn patterns. He is renowned for bringing ‘smooth’ and ‘flow’ to UK salsa.

DAVINA BIRCH, Co-Director of Alchemy Dance Company & Academy
DAVINA holds ISTD teaching qualifications in Modern Theatre Dance and Tap. She trained in Modern, Jazz, Tap and Ballet from the age of 3, taking Modern and Tap to advanced status. Further qualifications include a BA Honours degree in Drama & Theatre Studies, and various fitness teaching certificates including an S/NVQ in Exercise to Music.

Since 1996 Davina has taught in a variety of capacities. For several years she was a freelance fitness instructor in London teaching in many fitness clubs, gyms, studios and personal training. On achieving her dance teaching certificates she gained teaching positions in several dance schools and colleges around London. Davina was Head of Dance at a community youth theatre and taught the dance aspect of GCSE performing arts in secondary education. She has entered many students for dance examinations, and choreographed for numerous showcases, theatre productions, and competitions.
In 2003 she took up salsa, attending classes with Marchant who soon spotted her potential and undertook her training. It was from this that Alchemy Dance Company was formed, Davina’s jazz dance experience being part of the core technique training for the company. She also co-choreographed, with Marchant, Alchemy’s debut show ‘Timbalito’.
Davina is renowned for her smooth, sophisticated and sexy style. She has a reputation for the highest standard of teaching, her excellent following techniques for ladies, and how to style within the natural flow of partnerwork without affecting the man’s lead… the female Alchemy Way!