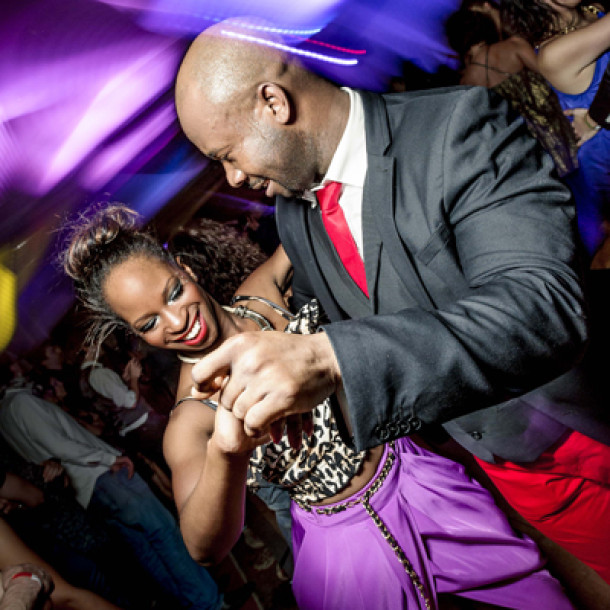 The clave is traditionally a wooden instrument consisting of 2 sticks which are struck together to make a clicking or tapping sound. Nowadays, sometimes it is a plastic hollow rectangular “box” which may be hand-held or mounted on the drum set – the timbales, cowbell, cymbal, woodblock, etc. And sometimes the clave rhythm sounds come from other sources, such as the drummer tapping the side of a drum. In Spanish, the word “clave” means a “key”, like a “key word” or the “key to a code”.
In salsa music, the clave rhythm establishes the key or structure to the song. Directly or indirectly, all the other instruments and the singers in the band are guided and structured by the clave rhythms. While it cannot always be heard in some salsa music, the clave’s beat always underlies the rhythmic structure of good salsa. While there are various clave rhythm patterns, the “Son Clave” is the one used in the classic, mainstream New York Caribbean-style salsa music preferred by New Yorkers for ON 2 dancing.
This clave is played within 2 measures of 4 beats each, a total of 8 beats. But it is only tapped on certain of those 8 beats in the 2 measures. There are two son clave rhythm patterns: the 3/2 clave and the 2/3 clave. The 3/2 clave is struck on the following beats: 1, 2 1/2, 4, 6, 7. The 2/3 clave is struck on the following beats: 2, 3, 5, 6 1/2, 8.
The clave creates a complex, syncopated, unevenness in the rhythmic structure that builds a tension in the group of 3 taps, and then releases or resolves that tension in the group of 2 taps, once in each of the 2 measures. It does this by going against, and then rejoining, the regular 8 beats, a little like one instrument playing in 4/4 time, and another playing in 3/4 time simultaneously.
This syncopation fascinates and inspires those more experienced ON 2 dancers who are particularly in tune to the music, and affects the way they feel and move when they have reached the level of the dance where they are truly “dancing in the music”. You may have heard the expression “Dancing on Clave” to describe New York On 2 mambo.
This needs some clarification. Actually, this is a loose expression to mean that the clave contributes to the 8 beat rhythmic structure of salsa, and also effects how we feel and move to the music. But we do not literally step to ALL the beats that the clave instrument taps out. For example, the 2/3 clave instrument taps out 2, 3, 5, 6 1/2, 8, while we step on 1, 2, 3, 5, 6, 7. So we are only stepping on the 2, 3 and 5 taps of the 2/3 clave. And the 3/2 clave taps out 1, 2 1/2, 4, 6, 7, while we step on 1, 2, 3, 5, 6, 7. So we only step on the 1, 6, and 7 of the 3/2 clave.
As an example of how the clave makes us feel and move, we break on 2 and 6, but the 6 break feels much more emphatic and part of the body than does the 2 break when we are dancing to a song with a 3/2 clave, because the 6 break is “On Clave”, at least when it’s audible in the music. In contrast, when the song we are dancing to has a clear 2/3 clave structure, the 2 break feels stronger than the 6 break. Many intermediate and advanced ON 2 dancers feel this difference, particularly those who are closely attuned to the music.
The clave always has one measure with 2 beats, and one measure with 3 beats.
The 2/3 clave has 2 beats in the first measure, and 3 beats in the second measure.

It is in the nature of the clave rhythmic structure that the 2 beats always stand out more emphatically than the 3 beats. That is, they feel stronger in the rhythm. Partly this is because the 2 beats resolve the syncopated unevenness or tension of the 3 beats. When we are breaking on 2 and 6, we are actually changing our body direction in conjunction with the strongest rhythmic emphasis in the clave’s beat. So although we don’t literally step on every clave beat, we do make a major body movement (a change of direction) on the major beat of the clave, the 2 beat which resolves the tension. It is in this sense that we “dance on clave”.
This style of dancing accents the clave’s emphasis on the 2 in the way we move our bodies in the dance. Other timings, such as breaking on 1 or 3, do not accent the clave’s emphasis on the 2 in this way. There is another use of the word “clave” you may hear.
“Finding the clave” – referring to when we take our first step, on the 1: “finding the clave” in this usage means finding the first beat of the 8 beat measure. Also, you may hear someone describe a DJ “mixing the songs on the clave” – This usage means going from one salsa song to the next keeping the tempo/timing of the 8 beats. Both of these uses of the “the clave” have to do with the regular 8 beats, and do not literally refer to the rhythms created by the tapping of the clave instrument.

I would like to express my thanks to Jimmy Anton, Addie Diaz, Carlos Koenig, Frankie Martinez and Eddie Torres, for their help in clarifying and putting into words the role of this fascinating and complex rhythm instrument, the clave, and how it forms a foundation unique to salsa and ON 2 mambo dancing.
And also my thanks to Manny Siverio, host of SalsaWeb.com/NY , for launching us into trying to explain the timing and the clave in a way that would be helpful to the viewers of our two web sites.
The Downbeats:
An important feature of New York “ON 2” mambo is that we begin most of our moves, turns and shines on the 1st and 5th beats of the measure, the downbeats.
For example, the cross body lead begins on 1 when the lady is already stepping forward with her right foot. The ladies’ turns are usually begun on 1, and the man’s turns are often begun on 5. Shines also usually begin on 1.
The 1 is the beginning of the 8 beats of the salsa measure (as noted above, it’s actually 2 measures of 4 beats each).
There is a strong “downbeat” or “emphasis” in most kinds of music on the 1, including salsa. It is the strongest feeling beat of the measure. That is when a dancer feels the “thrust” or “power” of the rhythm. There is another downbeat, somewhat less strong, on the 5th beat of the measure (the beginning of the 2nd 4 beat measure), when the man often begins his turns. The 1 and the 5 are the strongest rhythmic points in the salsa music, and that is where we begin most of our moves when we dance ON 2.

The Tumbao:
The tumbao refers to the rhythms accented by the conga drum player in mainstream salsa music.
Specifically, the conga is struck with 2 quick beats and then a 3rd “slap”, usually on the outer edge or rim of the drum, in the pattern of quick quick slow.
Sometimes this is audible in both 4 beat measures, and sometimes only in the first measure.
The 2 quick beats are on 8 and 8 1/2, and on 4 and 4 1/2. These 2 quick beats serve as a lead-in to the 1st and 5th beats of the measure, the 2 heavy downbeats that we step on when dancing ON 2.
In fact, when the 2 quick beats of the tumbao are very clear, they have the effect of “rushing us” into the 1 and 5 steps, making us hit them more emphatically and, sometimes, slightly early, which gives this style of dancing a snap and quickness in the look and feel.
Sometimes the “slap”, or the “slow” hit of the tumbao is not audible. But when it can be heard, it is often the heavier and more emphatic sound coming from the conga drum. That sound comes on the 2nd beat of the measure.
This means that if the tumbao sound can be heard during both 4 beat measures making up the 8 beats we dance to, then the strongest points of emphasis are on the 2nd and 6th beats, which is where we “break”, or change our body movement direction, when we dance ON 2.

We Start On The Major Downbeat, We Break On The Clave And The Tumbao When Eddie Torres says that this On 2 timing and style of mambo dancing “logically fits the rhythm of salsa music”, he is referring to the fact that the strongest beats in the rhythm, the 1st and 5th beats, are where we begin our moves: we begin our basic step, our cross-body-lead, our turn patterns, our shines. In other words, the beats with the greatest rhythmic thrust (1 and 5) are what power the “On 2” dancer’s moves. The greatest “push” or “action” in the music’s rhythm (the 1 and 5 downbeats) empower the greatest “action” in the dancer’s body (the initiation of a move).
In addition, as noted above, we do our 2 strong body motions, the 2 and 6 breaks (change of body direction), on the major rhythmic beats of the clave, and the strongest sounds of the conga drum, the 2 and 6. So in all three ways (the strongest downbeats, the clave and the tumbao), this particular mambo dance style and timing expresses in its strongest body movements what the structure of salsa music expresses in its strongest rhythms.

We start on 1, we break on 2: This distinguishes standard New York On 2 timing from those which break on 1, 3, etc., and those which don’t begin their moves on the 1st beat, such as timings where the dancers step on 2, 3, 4, and 6, 7, 8, for example Razz M’ Tazz and some Palladium, ballroom and international styles. Cuban Pete’s Personal Opinion – Quoting Fernando Lamadrid, “Cuban Pete, one of the greatest dancers of the Palladium era once explained it like this: “Dancing “On 1” is dancing “TO” the music. Dancing “On 2” is dancing “IN” the music. And at a panel discussion at the World Salsa Congress, he said “….Dancing “On 1” is like dancing to the melody of the music, while dancing “On 2″ is like dancing in the rhythm of the music.” It might actually be more precise to say “…….dancing “On 2″ is like dancing in the rhythm of the clave’s tension-resolving and dominant 2 beat”. While these statements are only an opinion, they are not uncommon. They do reflect many On 2 dancers’ belief and feeling, especially those who danced on another timing previously, that this particular method connects them more to the rhythmic percussive elements in the salsa music. And, by the way, most of us also love the melody and the words in the songs, not just the rhythm. The major point here is that the New York On 2 timing connects very well to the rhythmic structure of classic salsa music.

Please note, however, as mentioned in our Welcome & Introduction to this web site, that nothing here is meant to suggest that different ways of dancing to salsa music are any less legitimate or less enjoyable. No offense is meant, and none should be taken. There is no right or wrong way to dance. One can dance in many ways, and in connection with many different aspects of the music: rhythm, melody, mood, meaning of the words, tempo, harmony, intensity, etc. What matters most is what each dancer prefers…..and that they don’t smash into their neighbors on the dance floor.