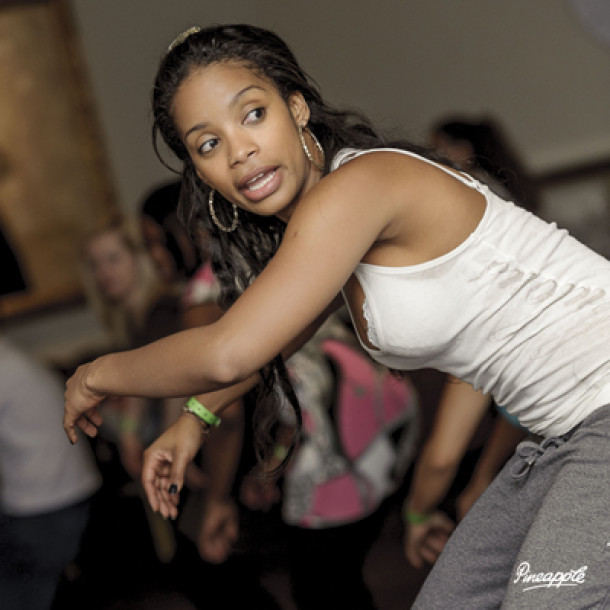 Clave: The African Roots of Salsa

In many musical discussions, styles of music found in the Americas and the Caribbean are often referred to as African-derived. Salsa is no exception and the following discussion explores what is particularly African about the music: clave, a rhythmic concept found in a variety of Latin-American styles. Similarities in sound and function to African bell patterns provide evidence towards a theory of clave’s origins and an evolutionary link between African music and salsa.

SYOTOS band at the Nuyorican Poets’ Cafe, with bandleader Dr. Chris Washburne on trombone and Bobby Sanabria on drums.Salsa is a Latin musical style that incorporates a variety of influences. Originating in Cuba and Puerto Rico and emerging from the musical climate of New York City in the 1950s, it has found popularity throughout the Americas and the other Caribbean islands, as well as in Europe and Japan. Salsa has its roots in Cuban popular and folkloric music and is enhanced by jazz textures. The name salsa, literally meaning “sauce,” has been in use since the late 1960s, popularized by New York’s Fania Records as a “catchy” marketing label. Salsa is often thought of as Latin essence, as the word “soul” has been a description for black American essence (Baron 1977 : 217).

In Spanish, clave literally means key, clef, code, or keystone. Fernando Ortiz believes that it is derived from “clavija,” meaning wooden peg, reflecting the appearance of the instrument which plays the clave rhythm, called claves (Ortiz, 1935: 9). Claves are two wooden sticks hit together to produce a high piercing sound. If no clave player is present in a salsa band, timbale players will often attach a hollowed-out, hard plastic, open-ended box to their cowbell stand and strike it with their sticks to produce a clave sound.

In Latin music terminology, the word clave refers not only to these instruments but also to the specific rhythmic patterns they play and the underlying rules which govern these patterns. Concerning these rules, Steve Cornelius chooses the analogy of a “keystone, the wedge shaped stone placed at the top of an arch which locks all the other stones in place” to describe the function of the clave in relation to all of the other parts in the music (Cornelius, 1991: 15). All musical and dance components in salsa performance are governed by the clave rhythm. In some way they must correspond at all times to the clave rhythmic pattern.
The clave pattern is two measures in length “in which each measure is diametrically opposed. The two measures are not at odds, but rather, they are balanced opposites, like positive and negative, expansive and contractive, or the poles of a magnet. As the full pattern is repeated, an alteration from one polarity to the other takes place creating pulse and rhythmic drive. Were the pattern to suddenly be reversed, the momentum within the rhythm would be destroyed…” (Cornelius, 1991: 15-6). The clave found in salsa, also known as son clave is notated in example 4. How a song begins determines which measure of the clave will be played first. The phrasing of the melody is the determining factor (e.g. where the accented rhythms of melody occur). This is referred to as either 3-2 or 2-3, meaning either the measure with the three strokes is played first with the two stroke measure following, or the two stroke is played first followed by the three stroke measure. According to tradition once a song begins the clave does not change its measure order. For instance there could never be a 3-2-2-3 clave sequence. Once the song has begun it functions similarly to the continuous bell patterns found in West African musical traditions by providing a rhythmic formula which serves as the foundation. As Roberta Singer states “Clave is a rhythmic time line that… functions as a rhythmic organizing principle for the entire ensemble” (Singer, 1982: 168). The rhythm may be overtly played, or implied. Competent musicians in salsa must develop a “clave sense” similar to what Richard Waterman labels a “metronome sense” where a subjective pulse is felt by the participants which may not be overtly heard and which functions as an ordering principle (Waterman 1952).

The clave concept reaches far beyond the musical context as demonstrated by the following excerpt from the inscription found on the inside cover of the first issue of New York’s Clave magazine, published throughout the 1970s:
Clave. …To us the word goes beyond explanations and definitions. It means life, salsa, the food of our leisure time, the motion of intense rhythm, the emotion of 20,000 people simultaneously grooving to the natural sounds of life. It’s being in beat, on key, on clave… It means to be on top of things, to be playing it right… “Clave is history, it’s culture. African drums from far off places like Nigeria, Dahomey, and Ghana married the Spanish guitar to bring us clave. The seeds were planted in the Caribbean and now their grandchild is Salsa…
This declaration effectively illustrates the broad range of the clave concept and some of its descriptive uses. More importantly it reaffirms the African roots of the rhythm.
The following evolutionary theory concerning the clave rhythm’s origins, which may explain why Africa and its hereditary nature are mentioned in the Clave publication, is based on three assumptions. First, when the 700,000 African slaves arrived in Cuba during the 1770s they did not forget the bell patterns from the traditional music of their past but rather incorporated them into music making in their new surroundings. Secondly, this particular pan-West African bell pattern (example 1) or something similar existed during the 1700s. This assumption is based on the pattern’s prevalence today among many different African peoples covering an expansive area. Thirdly, as new practices emerged from the combining of various African peoples in the New World, new performance styles arose. As the above inscription suggests, the performance of clave is a living and breathing tradition shaped by the performance practice of individuals. Each musician contributes to the proliferation and evolution of the tradition by their own subtle variations of feel and nuance. Over time, a subtle peculiarity or feel may become the standard replacing an older practice.
Rumba is a style of music originating from African slaves and their descendants living in Cuba. Some of oldest recorded Cuban rumba styles, such as rumba Columbia originating from the small towns of the island’s interior, are performed with a 12/8 feel, similar to musics where the bell pattern in example 1 is performed. However, in rumba Columbia the bell pattern or clave is slightly different from the one notated in this example. Instead of consisting of seven strokes, two of the them are omitted while the others remain intact (example 2). In some Haitian musical styles the same two strokes are omitted but the pattern is started on the third stroke instead. The reason for this omission may never be known since it occurred before recording technology was available. It may have started with an individual variation, or, was the result of the fusing of two or more African styles.

Another later style of rumba emerged from urban areas in a quasi-4/4 feel instead of 12/8 , called Guaguancó. The duple meter feel may have been the result of the influence of marching bands and other Spanish styles often heard in the larger cities throughout the 1700s. The clave used in Guaguancó appears to be an adaptation of the clave rhythm found in rumba Columbia to fit the new metric feel (example 3). This is most often referred to as rumba clave.

The next step of the evolution came from a simplification of styles. The son clave, used in salsa, displaces the final stroke of the 3 part of the rumba clave by one eighth note (example 4). This, consequently, as with all of the other adaptations, changed the musical parts. The name “son clave” was coined because of its use in son , a Spanish-influenced musical style originating in the rural areas of Cuba in the early 1900s. The rhythm of son tends to be much less complex, less syncopated and polyrhythmic, than the rumba styles requiring the modification of the clave rhythm.

Another factor that led to this simplification was the growing popularity of Latin music in countries other than Cuba. The foreign dancers were not always able to assimilate the complex rumba dance styles, therefore changes were made to accommodate the new audience.

The rumba tradition has continually been a stylistic influence on salsa music and performance, but the predominance of this new expanding market required change. The result was the preference of the son clave over the rumba clave to facilitate learning of the new dance styles. This theory can be tested with any newcomer to Latin music. The son clave will be inevitably easier to clap than the rumba clave. The son clave grew to prominence during the mambo dance craze of the 1950s in the United States and Puerto Rico and has remained in use in salsa performance today. Occasionally, salsa arrangements will have short rumba sections, or interludes, but will invariably resume the son clave for the body of the arrangement.

Current drumming styles in Ghana also suggest that a similar process of rhythmic adaptation has occurred. Patterns resembling rumba and son clave in both rhythmic construction and function are occasionally found. For instance, in David Locke’s book Drum Gahu there is a description of a “gankogui” pattern (example 5) that “establishes the overall rhythm of Gahu” and when playing this music one should “always try to establish your feeling for timing and groove by concentrating on this sounded phrase” (Locke, 1987: 16-19). This is precisely how salsa musicians use the clave rhythm. Notice that the gankogui has five strokes and only differs by one stroke from the son clave. How long this style of music has been performed in Ghana is not clear. This pattern may have been in existence during the slave trade era.

The search for Africanisms in the music of the Americas has been one approach scholars have taken throughout the last fifty years to understand the roots of black music. It is a quest that is wrought with difficulties because of the degree of generalization and speculation required due to the lack of objective documentation in written or recorded form. The processes of acculturation provide a complex of issues that are too vast to address in this short discussion. However, the similarities of the clave rhythm and its function to African bell patterns is worthy of note and may demonstrate the origins of the clave concept found in salsa today. Throughout this constantly evolving and changing process there appears to be a process of simplification occurring, if omitting strokes from the pan-African bell pattern can be equated with simplifying, as less rhythmically complex styles are fused and merge with the African roots. This is not to say that new types of complexities are not formed with the newer styles but simply that music change is constantly in motion. This one evolutionary possibility is presented above in hopes to stimulate future inquiries.