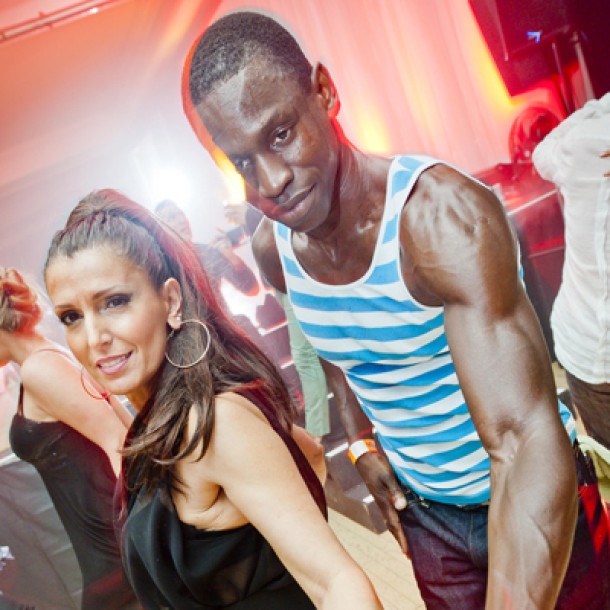 Salsa has origins in Cuban music but credit for it’s worldwide popularity belongs to the Puerto Ricans of New York! The popularity of Salsa throughout the world, is indirectly a consequence of American economic and social imperialism (MacDonalds, Coca Cola, TV, movies, music etc) but in this case, it is probably a good thing! Musically, Salsa has its roots firmly based in the Afro-Spanish musical traditions of Cuba but its worldwide popularity should be attributed to the Puerto Ricans of New York.

For Non-Latinos, our knowledge of Latin Culture and Music comes from American movies and in most cases that means Puerto Rican experience as depicted in them. Often, the first time we heard the music, it was in the backing track of a movie. It was probably even a movie that motivated us to go to a Latin nightclub for the first time! Between 1915 and 1930 around 50,000 Puerto Ricans migrated to the USA.

However, between 1940 and 1969 an additional 800,000 Puerto Ricans also migrated to the USA (especially to New York City). It can’t be a coincidence that this is the same period that interest in Latino musical styles increased throughout the world. This is the period when Mambo, Cha Cha, Rock’n’Roll, Bomba, Boogaloo and other dances dominated the dance floor! The dominance of Puerto Ricans over New York (North American) Latin culture can be attributed to the fact that Puerto Rico is a US protectorate.
The Jones Act (1917) made Puerto Ricans citizens of the USA. Thus Puerto Ricans being able to move freely between the mainland and their island, have also been able to more freely introduce Latin culture into America while maintaining and staying in touch with their own identity and heritage. I would even suggest that America’s attempt to Americanise Puerto Rico has just made the Puerto Ricans even more determined to cling to their identity and that for them, Salsa has become the unifying force that binds their homeland and its annex in New York. It is said that there are more Puerto Rican Salsa clubs in New York than there are in Puerto Rico.

When the Puerto Ricans migrated to New York, they often encountered a struggle for life in the ghettos. The only escape from the frustrations of their daily lives was through the traditional music of their homeland – the “Bomba y Plena”. Plena is a uniquely Puerto Rican style that deals with contemporary events, it is often referred to as “el periodico cantado” (the sung newspaper).

This Puerto Rican musical form, might account for the popularity, throughout the 1960s, of a style of salsa called “musica caliente”. Popular artists used lyrics that told a story about the struggles experienced by an average Puerto Rican in New York. Other artists expressed more emotional feelings about their aspirations for the future, the patriotism towards their country, and romance. Many artists, who came from El Barrio (east Harlem and parts of the Bronx), used another uniquely Puerto Rican genre – “Bomba”. Through this aggressive Afro-Caribbean beat they expressed their frustration with the conditions they were living in.

These musical forms began the modernisation of the 1950s Mambo, which has led to the creation of the Salsa. By the late 1970’s, popular demand for Salsa Caliente dropped significantly.  A new generation of listeners and artists started to emerge and salsa abandoned its portrayals of barrio reality in favor of sentimental love lyrics. This new sub-genre of salsa is known as “Salsa Romantica”. Salseros such as Eddie Santiago, Luis Enrique, and Lalo Rodriguez were amoung the first artists to begin this transition from musica caliente to musica romantica.

Today, Salsa Romantica maintains its popularity with its new wave of stars such as Marc Anthony, La India, Jerry Rivera, and Victor Manuelle attracting old as well as young salsa fans around the world. Izzy Sanabria (publisher of Latin NY Magazine 1973 to 1985) suggests that the Puerto Rican’s appear to have combined Salsa and Mambo steps into one dance. This blending of styles is particularly evident in what is popularly called Salsa Romantica. Take for instance Puerto Rican musician, Marc Anthony’s, “Hasta Que Te Conoci”, where the music starts slow (son-muntono/rumba), breaks into a faster tempo (salsa) building to a climax with the trumpets calling to the trombones and they answering (mambo), then the music falls, rebuilds, falls and ends.

Well! Salsa might describe a unique component of a dance but it also describes a unique style of music that requires the dancer to mix and match the steps and moves they know to match the music. It is probably now closer to the Puerto Rican Bomba tradition than the Mambo/Rumba Tradition. Bomba is danced by a man and woman who take turns showing off their skills, competing with each other and with the music.  I think that describes Salsa pretty well! Since the early 1800’s, Puerto Rico has borrowed musical styles from Cuba while preserving its home grown musical genres like the seis, bomba, and plena. These and other Puerto Rican influences are evident in the Latin music that has come from New York since the 1940s.
During the 1930s and 1940s Cuban music (particularly the Rumba) had, through the movies, gained a following within America and Europe. However, this was nothing compared with the following Afro-American jazz gained in the 1940s. As the two styles confronted each other a fusion of the Latin and Jazz styles occurred. Big band leaders, such as Puerto Rico’s Tito Puente and Tito Rodriguez and Cuba’s Machito, expanded the mambo section of the son, creating a new style of music and they can be credited with forming the musical foundation for the creation of Salsa.

Until the US severed diplomatic relations with Cuba in 1962, the New York and Cuban musicians continually interacted, forming parallel Latin music styles. After 1962, New York based music began incorporating the inspiration of the world around them, forming a distinctively New York Latin style that is dominated by influences from Puerto Rico. From 1962, Puerto Rico became the only place in the world that (had access to and) was recognised by the American music market as having a connection with the music.   Since the 1970s Puerto Rico has claimed the music as its own and dominates the Latin music market.  The term salsa, much like the term jazz, is simply a word used to describe a fusion of different rhythms. It was invented at the end of the 1960s to market Latino music and thanks to the New York Puerto Ricans has gained a following throughout the Latino and Non-Latino world. Cuba might own the musical heritage but the credit of taking it to the world should be given to the people of Puerto Rico who now preserve it and promote it as a globally popular tradition. This is not a definitive essay but is a collage of impressions I have obtained from consulting over a hundred web sites on Music history, Cuban history and Peurto Rican history.  If you have anything to add or even if you disagree please add your comments below.